What the Left is Doing to Cindy Sheehan 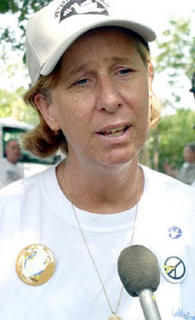 Cindy Sheehan, as everyone must know by now, is the mother of a soldier killed in Iraq. This earns her a lot of leeway when we consider the events of the day, because having lost a child in a war is an unimaginably painful thing.

Mrs. Sheehan opposed the war before her son Casey was killed. After his death, she met with President Bush, along with others who had lost a son or daughter in the war. All the parents seemed satisfied with the meeting at the time.

Today, she is camped out near President Bush’s Crawford, Texas ranch, demanding that he give her another meeting. More than a few people have joined her, some of whom have reasons for doing so other than sharing the grief of a mother who has lost a son.

However genuine her motives might have been initially, because of the nature of some of her associates, and because of Mrs. Sheehan’s own words and deeds, she has become more a political activist, and less a grieving mom. That is unfortunate.

It is an important fact in this saga that Casey Sheehan knew he would be going to Iraq when he reenlisted. So, he volunteered for the Army, served his time, and knowing that he would be sent to war, reenlisted. Mrs. Sheehan said, “He re-enlisted in August of 2003 because he didn’t want his buddies to do the job by themselves.” Casey Sheehan thought fighting in Iraq was important enough to reenlist and go to war.

That, of course, does not lessen the grief Mrs. Sheehan feels over the loss of her son. But maybe it should. He voluntarily went to a war zone. It was his decision to risk his life for his country. That deliberate decision ought to count for something, ought to have a mitigating effect on Mrs. Sheehan’s feelings about her son’s death. But it doesn’t. All Cindy Sheehan thinks about is blaming George Bush for Casey’s death.

Mrs. Sheehan exhibits symptoms of the second stage of the grieving process: anger. During this stage, people are angry at what they perceive to be the unfairness of death and may project and displace their anger unto others. When given support, they eventually become less angry and are able to move into the next stage of grieving.

The recent activities of Cindy Sheehan, however, turn the anger of a grieving mother into political activism. CNN reported Sheehan arrived in Crawford aboard a bus painted red, white and blue and emblazoned with the words, "Impeachment Tour."

CNN reported that Mrs. Sheehan told reporters, "I want to ask the president, why did he kill my son?" …"We want our loved ones' sacrifices to be honored by bringing our nation's sons and daughters home from the travesty that is Iraq IMMEDIATELY, since this war is based on horrendous lies and deceptions.” Stage two: anger. We understand that being angry at the loss of a loved one is normal. We are sympathetic to the person’s pain. We are even tolerant of the sometimes-irrational rhetorical flourishes. To a point.

The entire five-step grieving process, counselors tell us, usually takes one to two years. Casey Sheehan died in April 4, 2004, sixteen months ago. While we are all different in the way we cope with grief, Mrs. Sheehan probably ought to be further along the path to recovery than she is. But there is a good reason why she is not further along: She has become a convenient tool of the radical Left in their obsession against George Bush and the Iraq war. She is being held prisoner in stage two.

An August 13th Washington Post story illustrates plainly political behavior, on the part of people there ostensibly to support Mrs. Sheehan, and by Mrs. Sheehan herself.

Joe Trippi, the political consultant behind former Vermont governor Howard Dean's early success in the 2004 Democratic presidential primary race, put Sheehan on a conference call with liberal Internet bloggers. Were these folks interested in Casey Sheehan’s death, or wanting to make a point about a war they don’t support?

Next, Mrs. Sheehan launched a TV ad campaign hoping to achieve what her roadside vigil so far has not: a second chance to directly tell Bush what she thinks about him and the war. Twenty bucks says she had professional help at no charge to her.

Predictably, as Mrs. Sheehan stepped onto the media stage, she has become the focus of scrutiny of high-stakes political combat. People wonder what is going on here. They have learned about her first meeting with Mr. Bush, and wonder why she’s changed her story.

The Post story said, “After the meeting, she was quoted by the newspaper in her hometown of Vacaville, Calif., as saying that the president seemed sympathetic. Subsequently, she has said that Bush treated her callously during the meeting.”

The Leftist groups that have attached themselves to Cindy Sheehan, like MoveOn.org, Michael Moore, Code Pink, and others, are not interested in helping Mrs. Sheehan deal with her grief, or in the loss of Casey, they are interested in using her and him to advance their narrow political agenda. In doing so they are prolonging her state of anger, not helping her move past it. And by whipping up her anger, feeding it to produce rhetoric more befitting an irrational ranting shrew than a grieving mom, they are preventing her from getting what she says she wants, a meeting with the President.

So the Left, with the willing cooperation of Cindy Sheehan, has turned a situation that ought to be demanding our empathy into a cheap political exercise at the cost of her son’s memory.

Very well written, and very correct at the same time. Watching all of the "vigils" that have taken place, it's clear that the left will spare no expense to make their agenda known, and they will trample on anyone's memory as long as it helps get their message out.

Those on the Left like to pretend they are sensitive, compassionate and caring. But you're exactly right: They will spare no expense, and they don't care whom they use to achieve their goals.

I'm wondering how many more will be lost before we do bring them back home to the world. We're in the wrong place for the wrong reasons.

I don't agree that we're in the wrong place for the wrong reasons.

I think the general opinion of world leaders at the time was that WMD were in Iraq; it has been shown that Saddam supported terrorist organizations, even if -- IF -- he didn't participate himself; and I believe the world is a better, safer place with him in jail. Furthermore, it seems to be forgotten that Saddam Hussein tried to assasinate President G.H.W. Bush in April of '93, which all by itself is reason enough to have taken him out.

Given all that, we have to stay to complete the job of stabilizing the new democratic government.

However, I, too, am troubled by the continuing loss of American lives, and want the troops brought home as soon as that is realistic.

I'm wondering how the lefties such as George Soros (moveon.org) who has spent more in supporting her than most of us make in a lifetime will react to the breaking news of Sheehan's background and her traitorous remarks made a long time prior to the stupidity in Texas. I am also wondering if the credibility of that org. and others will be questioned.

I think people that are as far out on the Lefty limb as Soros, Michael Moore, Al Frankin, et al, don't really care what they say or do, and the more mainstream liberals in some proportion dislike that approach. Others, on the other hand, love it.

As jd said above, "it's clear that the left will spare no expense to make their agenda known, and they will trample on anyone's memory as long as it helps get their message out." I think that is, sadly, all too true.