One Down, Four to Go 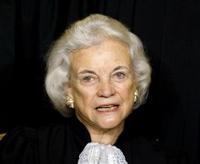 Supreme Court Justice Sandra Day O'Connor announced her retirement from the high court today, kicking off what promises to be an acrimonious summer confirmation fight over her successor.

The retirement took many in Washington by surprise, since speculation had centered on Chief Justice William H. Rehnquist--who suffers from thyroid cancer--to retire. Both sides had lined up to fight a massive and expensive battle over his replacement.

The fight over Justice O'Connor's replacement likely will be even more contentious because, unlike the reliably conservative chief justice, Justice O'Connor has been the swing vote in many 5-4 court decisions on the most significant court cases. Replacing her with a reliable conservative--which President Bush and the Republican-led Senate are expected to do--could shift the court to a more conservative route.

From The Washington Times


Hardly anyone approved of the Supreme Court's ruling allowing governments to take private property from its owner and turn it over to another private owner for private purposes. But that ruling is just one of many examples where the Court ruled improperly, failing to abide by the intent of the U.S. Constitution, and making decisions based upon nothing more than the prerogatives of the individual justices who formed the majority, and frequently worse, based on their perception of public opinion.