SPACE CENTER, Houston — Two astronauts floated out of shuttle Discovery for the mission's first spacewalk Saturday and tested repair techniques developed after the Columbia tragedy more than two years ago.

"What a view," said Soichi Noguchi as he emerged from the linked shuttle and international space station about 222 miles over central Asia. It took about an hour for Noguchi and Stephen Robinson to "gain their space legs" and begin working. 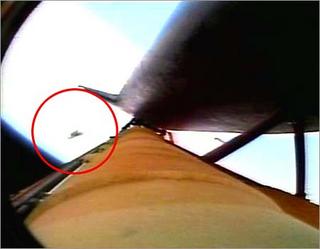 "There are just no words to describe how cool this is," Robinson said while riding the space station's robotic arm to connect a device needed for the installation of a storage platform next week.

The astronauts worked side-by-side in Discovery's open cargo bay during a portion of the planned 6 1/2-hour spacewalk. They used a variety of damaged tile and carbon samples brought to space to test the repair methods.

Robinson and Noguchi, a Japanese astronaut, worked with tools similar to an oversized caulk gun and large putty knives to apply an experimental material to the sample tiles that NASA hopes can be used in future missions to repair cracks in the delicate carbon panels lining the shuttle's wings.

The astronauts rearranged their schedule to perform the repairs while temperatures outside the shuttle were ideal for the experiment. Temperatures change very quickly; if they are in the sun, it can be up to 250 degrees Fahrenheit. When it's dark, it can be 250 degrees below.

"No bubbling at all. It's behaving very nicely," Robinson said of the experimental material as he applied it with the specialized gun.

During another application, Robinson did note a little bubbling. "It's gluey stuff so it's a little hard to get off."

The experimental material can be used to repair cracks or coating loss up to four inches long, but won't work on holes such as the one blown into Columbia's left wing by a 1.67 pound chunk of foam in 2003. All seven astronauts aboard that shuttle died.

In certain areas of the wing, NASA says cracks or coating damage measuring 2 inches long and .02 of an inch wide could doom the spacecraft.

NASA has developed a repair technique for holes in its carbon paneling, but that technique — which involves installing a patch over the hole and then bolting it inside the wing — will be tested inside Discovery later in the flight.

During the spacewalk, the pair also coated thermal tile samples with a caulk-like material in hopes of restoring the tiles' heat-rejecting ability — necessary for the shuttle to safely re-enter the Earth's atmosphere.

The sample tiles won't be tested for heat resistance until the astronauts return to Earth, but researchers want to see how well the mixture adheres in space and if there are any problems applying it in zero-gravity.

"That works pretty well," Robinson said as Noguchi used a foam brush applicator on one of the sample tiles.

Astronaut Andrew Thomas directed the experiments from inside the shuttle and noted the material became stringy as Noguchi applied it.

Once the repair testing was complete, Robinson shifted his focus to preparing tools and other equipment for two spacewalks scheduled next week. Noguchi, meanwhile, replaced a broken global positioning antenna on the space station.

NASA grounded future missions earlier this week after learning Discovery's external tank lost four sizable pieces of foam during Tuesday's liftoff. The foam pieces were bigger than the space agency wanted to see shed and officials said despite 2 1/2 years of tank redesign and the hundreds of millions of dollars spent, more work is needed.

NASA officials have said Discovery appears to have sustained no major damage during launch and is scheduled to return to Earth on Aug. 7.

That date, however, could be pushed back a day so the shuttle's astronauts can spend another day working aboard the station and leaving its crew with additional supplies — such as surplus food, water and laptop computers.

The station relies on the shuttle to ferry large cargo and additions needed for the station's completion.

NASA Administrator Michael Griffin said Friday that the agency may be able to launch another shuttle by year's end, but wants to do what it can for the station in case its fleet is grounded longer.