Another Jackass Pro Athlete's Inflated Ego Gets the Best of Him 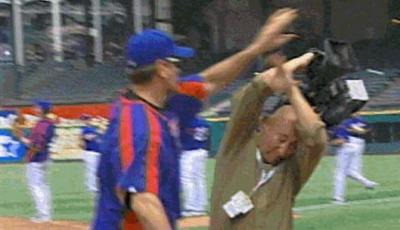 These spoiled brats just don't understand that even though they make millions playing kids games, they aren't really special. They aren't allowed to abuse people just because they want to.

NEW YORK — Texas Rangers pitcher Kenny Rogers was suspended for 20 games and fined $50,000 by Major League Baseball on Friday for an outburst that sent a television cameraman to the hospital and prompted a police investigation.

Rogers shoved two cameramen before Wednesday's game against the Los Angeles Angels in a tirade that included throwing a camera to the ground, kicking it and threatening to break more. The incident was captured on videotape and led to KDFW cameraman Larry Rodriguez being treated at a hospital.

Rodriguez filed an assault report, and Arlington police spokeswoman Christy Gilfour said the case was being investigated as a misdemeanor assault. Rogers hadn't been interviewed by investigators and no charges had been filed Thursday.

Rogers, who missed his last start with a broken pinkie he suffered during an outburst earlier this month, erupted at the cameramen as they filmed him walking to the field for pregame stretching before Wednesday night's game against the Los Angeles Angels.

If I were in charge of pro sports, I would negotiate a basic salary for all players, which would probably be higher than the present one, then I would instigate a rule whereby all marketing and performance-related bonus income must go into a pension fund which the player can only access when he/she retires (which can only be once, Mr Jordan...).

That way, when they are playing, you know they are motivated to actually play the game, not just warm the bench collecting more than their teammates put together like some of the prima donnas these days.

What a refreshing change to have players actually have to work for their money. A performance-based pay system would make a world of difference.

The way Baltimore deals with its minor league team here in town reflects the philosophy of MLB teams regarding young talent. The Os insist on "very nice" facilities for their boys. Their dressing room is pretty nice, and the money they require the local baseball club to put into the field and other aspects of the operation is substantial.

Baltimore puts a lot of money into some players, and they don't want them to become discouraged by having to play in "substandard" conditions. They begin spoiling them at the lowest professional level. No wonder they are dopes when they make it to the Bigs.

This is a small community, and its very tough to please Baltimore and have some money left over at the end of the year for other needed improvements. It's as if they expect almost professional quality playing conditions for these kids. The players really don't need that, and I think a good argument can be made that the field they are learning on should be the same level of quality as the average player. As they improve and move up, their conditions improve.