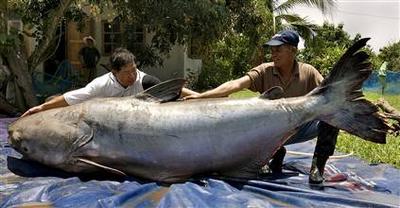 Thai fishermen netted a catfish as big as a grizzly bear, setting a world record for the largest freshwater fish ever found, according to researchers who studied the 646-pound Mekong giant catfish as part of a project to protect large freshwater fish.

“It’s amazing to think that giants like this still swim in some of the world’s rivers,” project leader Zeb Hogan project leader said in a statement. “We’ve now confirmed now that this catfish is the current record holder, an astonishing find.”

“I’m thrilled that we’ve set a new record, but we need to put this discovery in context: these giant fish are uniformly poorly studied and some are critically endangered," added Hogan, a fellow with the World Wildlife Fund, which is partnering with the National Geographic Society. "Some, like the Mekong giant catfish, face extinction.”

"The challenge is clear," he added, "we must find methods to protect these species and their habitats. By acting now, we can save animals like the Mekong giant catfish from extinction.”

Hogan's project includes two-dozen other species, including the giant freshwater stingray, the dog-eating catfish, the dinosaur-like arapaima, and the Chinese paddlefish – "all of which remain contenders for the title of the world’s largest fish," the researchers stated, pending the final results of their work.

Didn't survive capture
The Mekong giant catfish was caught and eaten in a remote village in Thailand along the Mekong River, home to more species of giant fish than any other river in the world, the researchers said.

Local environmentalists and government officials had negotiated to release the fish so it could continue its spawning migration in the far north of Thailand, near the borders of Thailand, Laos, Myanmar and China, but the adult male later died.

The researchers said the Mekong giant catfish is declining as a species due to habitat destruction and upstream dams.

The Mekong River Basin is home to more species of massive fish than any river on Earth, they added, and Mekong fish are the primary source of protein for the 73 million people that live along the river.