Baseball is Back in Bluefield

I always welcome the return of the Appalachian League baseball season. September to mid-June is a lllllooooonnnnnggggg time.

The League has been around since 1946, except for 1956 when it disbanded for one year. Bluefield has had a professional baseball team since 1924, and its 47-year relationship with the Baltimore Orioles is the longest relationship with a major league team of any minor league team in the country. Prior to Baltimore, we’ve had farm teams for the Boston Braves, the Washington Senators, the Boston Red Sox, and the Brooklyn Dodgers. Baltimore took over in 1958. 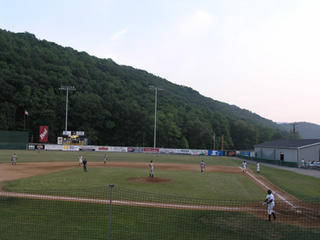 This year the season started June 21 with the Os on the road. They returned to town for Friday’s home opener with a 1-2 record.

Appy League ball is a true phenomenon. It’s a rookie league, and while some of its teams have their lowest level farm club in the Florida Grapefruit League, the Orioles gave up that team two years ago, and now Bluefield is the entry level team in the Os’ farm system. That means most of the guys that play here have never played professional ball before. Many of them are 18 and 19 years old, and they’ve never hit with a wooden bat.

At this level, the emphasis is on teaching these kids to play baseball. Sometimes, the Baltimore brass forgets that they also need to learn how to win.

You never really can predict what will happen in an Appy League game. Sometimes they play like pros and sometimes like Little Leaguers. I’ve seen teams come from 10 runs down in the late innings to win, and conversely drop a 10-run lead to lose. Oh, yeah. I forgot to mention that the umpires are learning their craft, too. With all of those factors, some games are very “interesting.”

The Baby Birds did themselves proud in Friday’s game against the Danville Braves. Down 3-1 late in the game, a kid who was here last year named Denver Kitch hit a three-run homer that gave the Os a one-run lead that they were able to hold onto. So they won the first home game and evened their record at 2-2.

Saturday’s game, the second in a three-game series, was less satisfactory. Twenty-three runs were scored in the game. The problem was that Bluefield only scored eight of them. The starting pitcher gave up five runs quickly and was taken out in the first inning with just one out on the scoreboard. It was pretty much all down hill from there, although the Os mounted a couple of threats along the way. Kitch hit pretty well again, and outfielder Drew Moffitt hit two homers. That, and a couple of good defensive plays were the highlights.

But I remain optimistic. In 1997, we had a terrible start, something like 2-10, but wound up winning the League Championship for the second straight season. We had a hungry young manager named Bobby Dickerson who didn’t like to lose. The Os won one comeback game after another that year. It was a storybook season.

Ah, the one reason I regret not growing up in the USA is that I missed getting involved in baseball - it is a truly great sport indeed.

At least now with broadband internet I can keep up with my Oakland A's on a daily basis.

Baseball is the greatest sport, in my opinion. Especially at the minor league level. I get a little frustrated with the inflated salaries, inflated egos and the cost of the major league game.

And there isn't the virtiol and petty-ness of politics.