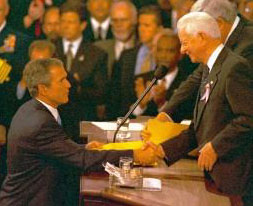 I am a native West Virginian. In my younger days, I worked for the local TV station news department. At the time - 1975, I think - Robert C. Byrd was the Chairman of the Senate Appropriations Committee, the committee that doles out federal largesse to the states. I had always held Sen. Byrd in high esteem, being somewhat in awe of a U.S. Senator, but even so was a bit irritated that he was doing a good job with the committee, but a poor job of getting West Virginia its “share” of federal money.

I had the occasion to interview Sen. Byrd for a 10-minute segment of a program that followed our 11 o’clock news show, and asked him many questions, among which was “why are you not as aggressive as senators from other states in bringing federal money to your state?” To which he answered, “As Appropriations Chairman, I do not want to be accused of showing favoritism to my state over other states,” which I thought was an honorable position for him to take, even though his state suffered for it.

Sen. Byrd made up for those years of under-pork-barreling West Virginia after he was elected Democratic Leader in 1977, and was no longer Appropriations Chairman, and more recently has come to be known as the “King of Pork.” I have defended him numerous times, knowing the early history. I firmly believe that even though he is very active in getting federal money home, when you average it all out over all these years, he’s probably no worse or better than most other senators.

I have also defended him against the use of the fact that 60 years ago he was in the KKK. It irritates me that Republicans and conservatives would stoop to the level more familiar to Democrats and liberals where someone is forever guilty of their youthful indiscretions. I do not believe that Sen. Byrd is a racist, has not been one for at least the last 40 years, and may actually never have been a racist, and I think it is a cheap shot and intellectually dishonest to use the KKK membership issue to batter him.

In the last few years, however, Sen. Byrd’s behavior and rhetoric have taken their toll on my respect and high regard for him. His recent tirades savaging the Bush administration have pushed me over the limit of my patience, and this last absurdity in which he compares Republicans to Hitler in their effort to abolish the Democrats’ filibustering judicial appointments, and bring nominees to the floor for a vote is the last straw.

Sen. Byrd is 87 years old, and it has begun to show. This 46-year veteran of the Senate, once beloved in his home state now behaves so badly that he has become an embarrassment to his constituents.

My impression of Byrd is that of a Hypocrite- and saying that the Republicans are like Hitler, when he was part of the KKK, makes my blood boil. The guy was a "Kleagle" back then, and he's a crazy coot right now. The only thing Iv noticed he's done is name everything after himself.